The contract consisted of the following:

• Control Centre.
• Static Security Officers for the outer perimeter.
• PSD team.
• QRF for the base.
• Mobile and foot patrols.
• Access and egress control with an Explosive Detection (EDD) capability in support. (Dog Handlers and teams)
• Administrative support in the form of security statistics, reports and feedback on a daily weekly and monthly basis.
• Training and retraining on an ongoing base.

Due to services well rendered this specific contract was extended to 30 September 2005. During this period of service, the following was achieved:

• Due to effective systems and procedures, no serious incidents occurred.
• No explosives or any devices passed the control point undetected.
• No physical attacks occurred on the base.
• More than 380,000 individuals (construction workers and military personnel) entered the base through controlled access.
• More than 40,000 vehicles were searched through controlled access. In excess of 50 + PSD missions were executed per month. 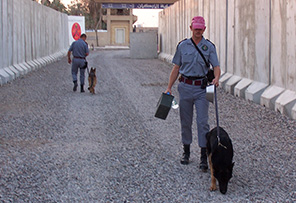 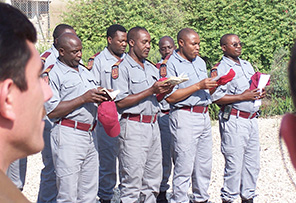 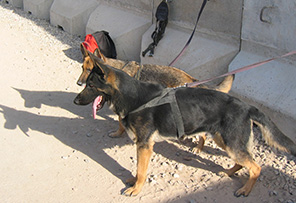 • Security advice was provided to IMAR, NATO, KBR and Laguna on a consistent basis to support their management capabilities.
• Intelligence reports were provided daily.
• Advice and assistance was provided during the planning and execution of high level visits by various Generals of the Coalition Forces and NATO.
• No clients were ever lost, killed or injured during any of our PSD missions.
• Good communications and coordination was maintained with our various clients and the occupants of the Academy, throughout our deployment.
• Omega received commendations from the Iraqi High Command at Al Rustamiyah for the professional approach and mutual respect, demonstrated during consistent security operations.
• Omega received feedback that our security operation at the Academy was of the highest standards maintained in Iraq, after being evaluated by Coalition Forces and NATO representatives at various occasions.
• During a visit by Major General Pier Giorgio Segala to Al Rustamiyah Military Academy, Omega was presented with a commendation certificate for professional standards and commitment demonstrated on a continuous basis, creating a safe and secure environment.
• All Omega Security Personnel recruited for Iraq, underwent stringent psychological, background and medical evaluations.

Mine Clearance Projects and Consulting Assignments Conducted within Angola

The U.S. President’s Emergency Plan for AIDS Relief (PEPFAR) is the U.S. Government initiative to help save the lives of those suffering from HIV/AIDS around the world. PEPFAR is driven by a shared responsibility among donor and partner nations and others to make smart investments to save lives.

PEPFAR is the cornerstone and largest component of the U.S. President’s Global Health Initiative. With a special focus on improving the health of women, new-borns and children, the Global Health Initiative’s goal is to save the greatest number of lives by increasing and building upon what works and, then, supporting countries as they work to improve the health of their own people.

This program was renewed in 2009 for a further 5 years till 2013, however this deadline was extended till September 2015.

Omega has been a part of this program since 2007 as the sole security provider in 14 of the 16 focus countries (in Vietnam and Guyana – security is provided by the police). Services included static guarding, electronic security monitoring, road escorts and verifications of consignments.

The original focus Countries to receive donated medicines were:

Omega held a contract with Fuel Africa Logistics for the provision of security services to protect HIV/Aids medicines donated by the United States to 18 countries around the world with the highest HIV/Aids infection rate.

Since the onset of the contract the following countries have been added as non-focus countries, but medicines can also be donated:

To manage the contract, Omega formulated Security Operational Procedures and appointed a Key Account Manager to manage all operations.

Where Omega did not operate directly, strategic alliance contracts were entered into with suitably qualified and experienced local Security Companies to provide the service. Omega operated either directly or through strategic alliance partners under management of the Omega Key Account Manager in 16 of the 18 distribution countries.

The protection tasks included the following:

• Medicine shipments arrive by air or by sea.
• Security teams meet the shipment when unloaded from aircrafts or sea containers.
• Verify the shipment using the shipping documentation for correct quantity, type, batch number, damage, lost cartons etc.
• Take photographs of all damage cartons or product.
• Ensure the integrity and safety of the drug shipment at all times.
• Report any damage, loss or any other incident that could jeopardize the shipment of medicines immediately to the Omega Key Account Manager.
• Oversee loading of the shipment on trucks and escort trucks to the consignee premise.
• Oversee the handing over process and eventual signing of a Proof of Delivery (POD) document.
• Submit a full report with photographs to the Omega Key Account Manager who reported back to the SCMS Global Security Coordinator.
• Shipments were also escorted across as many as three different countries from the Regional Distribution Warehouses located in Accra (Ghana), Nairobi (Kenya) and Centurion (Pretoria South Africa). Distances exceeding 3000 kilometres were travelled for some shipment deliveries and security teams escorted shipments all the way.
• Security presence, involvement, assistance and intervention has prevented, removed and ensured safe delivery of shipments in many occasions.
• Omega also provided security guarding protection services at the Regional Distribution Warehouses located in Accra (Ghana) and Nairobi (Kenya).
• An advanced Closed Circuit Television (CCTV) system and intruder alarm system had been installed in the Kenya and Ghana bond stores.
• Since the inception of the protection project in 2006, Omega had protected medicine shipments in excess of a billion US Dollars successfully with no losses that could be contributed to a security problem or failure.

Omega has the necessary experience and know-how with regard to the design and implementation of such a system, and has implemented and operated the macro surveillance system in Johannesburg City Centre.

Collectively Omega employed 173 individuals on macro surveillance projects in urban environments, however cognisance should be taken that Omega employ in excess of 11 000 people. This enables us to utilise and transfer staff on short notice if and when needed for current or new contracts. 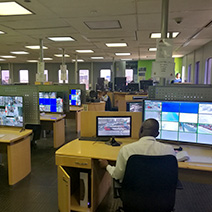 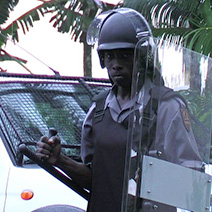 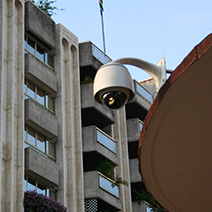 Over this period an average of 500 security staff was employed. This escalated to 700 during shutdown periods.

The contract made provision for the rendering of the following security services:

In 2005 Omega won the contract that was offered by the Government of the Democratic Republic of the Congo to upgrade the security functions that were executed at the different ports on the Congo River. The requirement was that these ports had to reach the level where they could be evaluated and receive an International Ships and Port Security (ISPS) approved rating. All the Ports were international harbours.

The contracting part was the National Transport Authority (ONATRA). The Ports that had to be upgraded was:

Omega utilized its subsidiary Omega Security Solutions sprl to execute the task. The focus was:

• Training of the current security work force to an acceptable level of security knowledge.
• Developing a Train the Trainer program so that local trainers could be trained to the required level.
• Utilizing the local training staff to train security work force on the prescripts of the ISPS Code. This was done due the language barriers that were experienced. 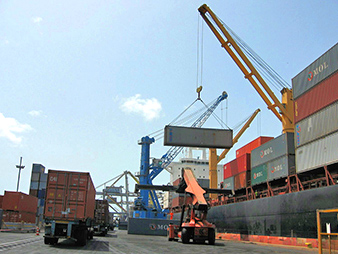 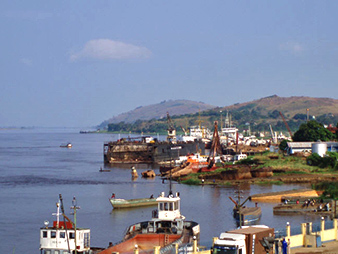 Omega and Debswana entered into an agreement in 2011 whereby Omega rendered security consultancy services to Debswana at Jwaneng and Orapa Mines for approximately one year.

Omega did a complete Business Process Re-engineering of Jwaneng and Orapa which included a lot of aspects. Herewith a few:

• Carried out comprehensive security surveys, to obtain an effective, sustainable and adaptable security plan.
• Based on the outcomes of the survey, formulated and implemented a combination of several security measures to mitigate risks and to contain crime.
• Identified threats and criminal forces.
• Made recommendations to assist with executive decisions, strategy, policy and action.
• Continually assessed security and production operational practices at all areas for inefficiencies / possible improvement opportunities and makes recommendations to enhance value delivery.
• Reviewed all human interventions into high concentrate diamond processes due to spillages, chokes, etc. and investigate means to minimise the requirements for people to operate in high risk areas.
• Worked closely with staff at the operation in building a strong security culture and positive social contract with employees in high risk areas in order to negate negative motivations to steal or be acquiescent to theft.
• Jointly managed performance within high risk areas in conjunction with Operations Leadership.
• Orientated Security personnel to understand the diamond processes to enable early identification of vulnerabilities.
• Educated all personnel assigned to high risk areas on the procedures and how issues of coercion and collusion can impact upon them and what to do if approached or threatened.
• Developed and maintained internal and external networks and contacts, local communities for information gathering to ensure an effective investigation process and optimal asset protection.
• Investigated general crime offences in accordance with policies and procedures with a view to securing convictions and establishes suspect profiles.
• Conducted ongoing Security vulnerability and risk assessments and use the results to minimise losses.
• Conducted sectional diamond control and functional audits for security component.
• Provided first line support to Command Control and co-ordinate early stages of emergency incident responses until response team is formed and operational.
• Monitored departmental adherence to Safety and Health programme goals and objectives.
• Ensured adherence to the company’s environmental management programme and objectives are implemented according to statutory legislation and the Strategic Management Plan.

At these sites Omega rendered the following services:

• Prevent asset losses of the company.
• Build and sustain a strong social contract with employees in high risk areas.
• Introduce and maintain intelligence systems in order to act proactively.
• Internalisation of security in the workforce.
• Enhances the ability and effectiveness of staff to perform their jobs through focused training.
• Provide security leadership.
• Reinforce the security values of DBCM, Voorspoed mine.
• Influencing stakeholders.
• Re-evaluate the current processes and procedures and devise new processes and procedures.
• Improve the quality of service.
• Provide an open, flexible, reliable technology base for the future.
• Day to day management of the security of the mine.

On 1 October 2010 Omega started a contract to provide security services to Resolute’s Golden Pride Project (Gold Mine), which is located near the town of Nzega in north western Tanzania. The total compliment of the core team was one hundred and forty men and eight patrol dogs. Thirteen dog handlers and one kennel master managed the patrol dogs.
The theft of diesel was one of the main threats to the previous security provider. In order to address this threat, the concept of operations entailed the deployment of static security posts to guard fixed assets such as water pumps, the guarding of mobile assets such as dump trucks and excavation equipment and access and egress control points at the main gate.
The mobile response teams were mounted on patrol vehicles and consisted of the patrol commander, dog handler and two patrolmen. At night the mobile response teams deployed on foot to monitor known access routes that were used by the intruders. They were equipped with night vision equipment.
The dog teams gave the security contingent an additional advantage as follow up operations could be execute even when the visibility was poor. A number of perpetrators were apprehended due to this advantage.
Training and retraining of the dogs was executed on a fixed program to ensure that the animals performance met and maintained the highest standard.

Mine and Explosive Detection Dogs

During the Angola Soyo LNG demining contract Omega used mine and explosive detection dogs. Omega had 20 x dogs and 10 x handlers on site.

The dogs where utilized to do area reduction, to reduce the area to be demined.
The size of the land was 123 hectares next to the Congo river on the Kwanda Island. The area has a low groundwater level of approximately 1 meter and was covered with palm trees and scrubs.
Due to the heat the dogs could only work for short periods of time and therefor each dog handler had two dogs. The dogs rested in air-conditioned containers close to the area where they worked. 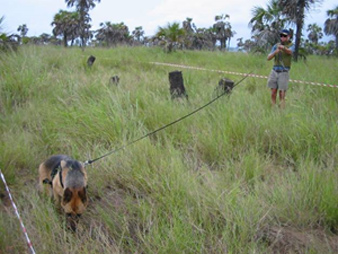